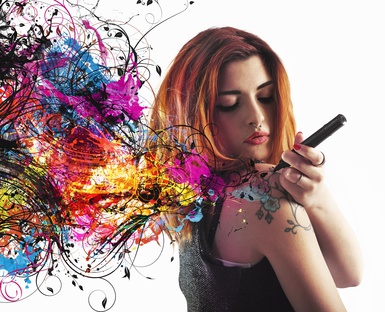 My short answers? Yes and yes. I personally believe that piercings and tattoos are both a freedom of expression, creativity, and beauty. Through the years tattoos and piercings have become trendy, but this doesn’t change the fact that they are becoming more and more of the “norm” in today’s society.

Back in the day, tattoos used to be associated with criminals, bikers, and males. However, tattoos are now much more common—among both men and women.

But regardless of the fact that tattoos and piercings are more common today than ever before, they still have a negative stigma. Many still see tattoos as unprofessional and sometimes even a bit “sketchy”. Although I have two tattoos myself, I’m even guilty of it…

For example, a few weeks ago I hired a group of contractors to put on a brand new deck on my house. On the day they arrived, one of the younger guys had tattooed sleeves up and down both arms, and even up his neck. I admit that even I felt a little sketched out. But that didn’t affect him from doing a good job…nor did he try to kill me. So there’s that.

Back in the day, I used to work with a girl who was a graphic designer. She had tattoos all over her arms, and basically on every visible piece of skin. She also had piercings in her ears, on her face, and even her chest. But she did BEAUTIFUL work. She was one of the top designers on our team, and eventually got accepted into one of the most prestigious and competitive art programs in New York.

While I believe that many people get tattoos and piercings today because it’s trendy and kind of “the thing to do”, for me they have to have a purpose. My tattoos symbolize “love”, in its various forms, and the art, beauty, and even pain from which grows determination and strength.

Don’t get me wrong. I think there are cases where tattoos and piercings can go a bit overboard or even cross the line. But overall, they shouldn’t be the basis for which we pass judgments or prejudices.

If you judge someone, then you have no time to really love them.